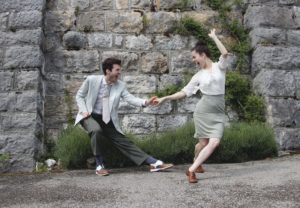 Viviane and Florian dance and teach together in Biel, Switzerland. Their style is energetic and playful, always with a dash of Boogie in their Lindy, some Shag in their Boogie and then back to some Balboa. They love to dance to R&B until the break of dawn.

Vivi began to dance Lindy hop in 2007 but really got started with swing dancing five years later at Herräng Dance Camp 2012 where she first tried Boogie Woogie and Balboa. Since 2013 she’s been teaching Lindy hop in Biel, Switzerland. She started to dance and teach Collegiate Shag in 2014 and has been part of Stephen & Chanzie’s Euro Shag Team performance at Rock that Swing Festival in Munich in spring 2015. Thereafter she had the great opportunity to travel to Los Angeles for five weeks and be tutored by Stephen, practicing and teaching his local classes with him. They taught workshops together in a handful of events in Europe. Nowadays she’s mostly teaching local classes with her dance partners Roman Wyler and Florian Zbinden in Biel and Bern.

Flo’s central topic in his life has always been Music. Born into a very musical family he learned the saxophone and sang in different choirs. When his fifth-grade teacher brought up dancing to swing music in physical education for some weeks he was hooked. At the time they had no name for it, so it took another seven years until Florian found out what Lindy Hop really was. A good friend, Viviane Fahrni, he met in the high school choir turned out to be a local Lindy Hop instructor. Already in love with jazz he got sucked in by the swing dances. Learning big parts of the dance by back leading, he loves to give his follower space and join them on a dance adventure.