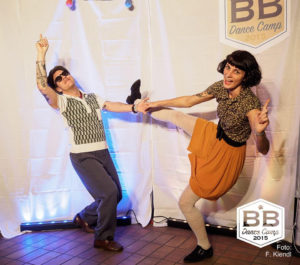 Sandra enjoys to travel. Although she is a bit afraid of flying, that has not stopped her from performing and teaching around the world. She is a restless soul and doesn’t think it is enough only to teach and perform: she also organises swing dance camps and writes, choreographs and produces a yearly swing dance musical together with Mattias Lundmark under the name Lindy Christmas. Those musicals, as she sees it, are the best! I mean, who doesn’t love singing, dancing and self-made glittery costumes?! www.lindychristmas.com

Sandra loves old swing clips. She is a bit obsessed with them and has a big collection. Her goal is to study and learn them herself, and then finally teach them. She has a clear authentic vision and in her work, she aims to keep and hone the style, craziness, energy and feeling of the golden age.

Markus – or better known as Mr. Ramble himself – is a professional dance teacher, performer and DJ. A well regarded specialist in dances from the 1920´s – 1950´s, Markus now teaches Lindy Hop, Boogie Woogie and Authentic Jazz.

Markus started his dance career in 1999 when he was a competition dancer for the Swedish National Team, he continued to compete for the team until 2010. From 2006 alongside competing Markus has been travelling around the globe teaching at various events, from Herräng Dance Camp which is located in the home country of Sweden to Osaka, Japan and everywhere in between.

As well as teaching adults, Markus has enjoyed working with the community, touring Sweden teaching children around the country about dance and dance culture.

Want to know more about this fella? – www.markusrosendal.com